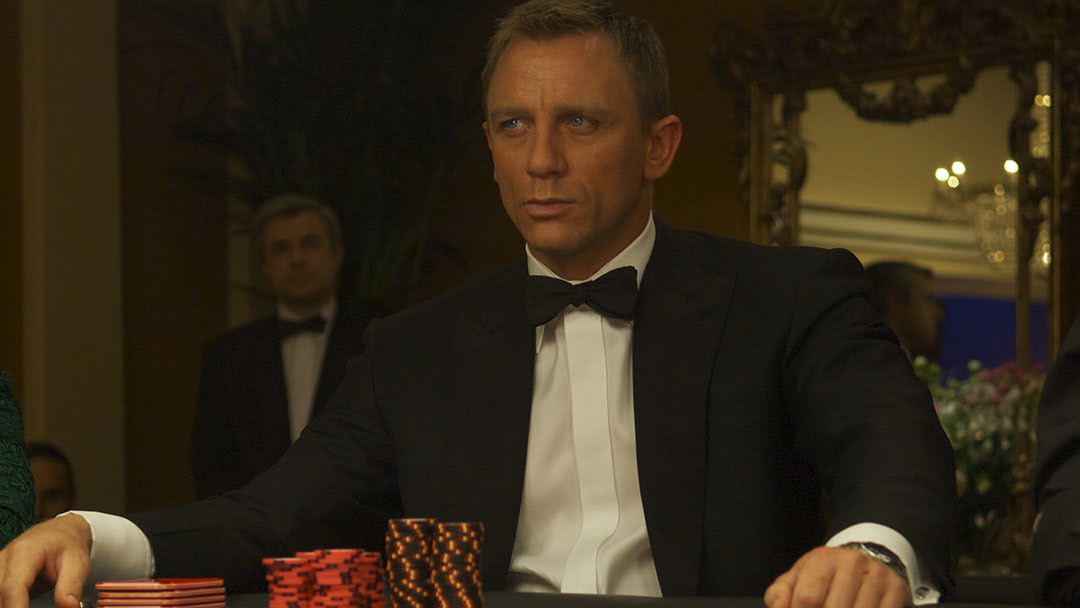 Missing the office Christmas party? Festive Zoom cocktails with the CEO rocking a pair of spangly reindeer antlers not doing it for you? Well, you may not be able to photocopy your bum and get off with someone in the stationery cupboard this year, but at least you can drink. If the guys who got in touch with me a few years ago have their way then future invitations to virtual cocktails will mean just that.

At Casino Royale in Montenegro, British spy James Bond 007, licensed to kill, is in the highest-stakes poker game of his life.

Bond watched Le Chiffre closely as he placed his cards on the table. The dealer’s tone was even.
“A full house to Monsieur Le Chiffre. Deuces full of nines.” He turned to Bond. “Mr. Bond?”
“Fold.” Bond had what he wanted, Le Chiffre’s tell. Now he needed a drink. “Send the barman over, please.”
The maître d’ materialised silently at Bond’s shoulder and bowed low to take his order.
“A dry martini.” Then he saw Vesper; and thanks to the dress she was wearing, more of Vesper than he’d ever seen before. It left little to the imagination, and Bond’s was more than capable of filling in the blanks. He decided something stronger was in order. “Wait. Three measures Gordon’s, one of vodka…half of Kina Lillet, shake it over ice…then add a thin slice of lemon peel.”
Felix Leiter’s head bobbed up from his cards.
“My friend, bring me one as well. Keep the fruit.”
The maître d’ hesitated, his eyes squirming around like they were trying to escape.
“Err…actually, Sir…”
“What’s the problem?” Bond turned and fixed the maître d’ in a steely gaze.
“I’m not sure we have that on the app.”
“The what?”
Bond watched as the maître d’ produced what looked like a small white plastic blender from behind him and placed it on the green baize of the poker table with a flourish.
“We don’t have a bar any longer, Sir. We have this.”
Bond swallowed hard.
“No bar?” he said, hoarsely.
“No, Sir.” 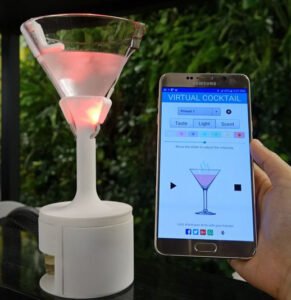 Bond’s knuckles whitened where he was gripping the rolled leather edge of the poker table. Le Chiffre’s face twisted in a sadistic smile as the maître d’ plucked a martini glass from the hovering waiter and plonked it on the top of the plastic device.
“This plays with sight, smell and taste to create an interactive drinking experience with virtual flavours. Within the device, there are three scent cartridges and three micro air-pumps which provide the aroma of the drink which interacts with Sir’s sense of smell and alters his perception of the taste of the beverage.”
Bond narrowed his eyes. “Did Q send you?”
The maître d’ shook his head and continued his animated demonstration of the device on the table.
“There are ‘smell chambers’ underneath this glass so it takes about one second for the smell from the chamber to reach Sir’s nostrils. In addition, Sir can vary the colour of the drink using these LEDs and the companion app. The system also contains two silver electrodes on the rim of the glass which stimulate the tongue in order to give salty, bitter or sweet tastes whilst consuming the drink. Different magnitudes of current are used to stimulate the tongue for these flavors: 180 microamps for a sour taste, 40 microamps for a salty taste and then 80 microamps for a bitter taste.”
“So current tastes salty, brother? Is that the deal?” Felix Leiter leant across the table and regarded the device with interest.”
Bond had heard enough. He had a game of poker to win and he didn’t intend to do it sober. He grabbed the maître d’ by the lapels and pulled the man’s face close to his. His voice was low and threatening.
“Unless you want to find out how salty a Walther PPK tastes I suggest you find me someone who can mix me a cocktail.”
“Mr Bond, I’m sorry but this is all we have—everyone drinks them now. It’s a virtual cocktail. A Vocktail.”
Bond abruptly released the man. He was already under investigation for sexually harassing Moneypenny; M had replaced his Aston Martin with a Renault Twizy and kept sending him eye-roll emojis on WhatsApp, and to cap it all the new tailored dinner suit Vesper had made him wear had an inside-leg so parsimonious it was making his eyes water. Now he couldn’t even get a martini at a poker game. He was rapidly coming to the conclusion that it was time to hang up his holster, if his dinner trousers didn’t beat him to it.
“So, are we ready to play poker now?” Le Chiffre looked impatiently around the table, but no one took any notice. Bond picked up the machine and gave it a tentative rattle, to the consternation of the maître d’ who gently retrieved it and put it back on the poker table.
“Oh no, Sir, there’s no need to stir or shake.” The maître d’ opened his hands around the Vocktail. “This 3D printed structure contains all the electronics necessary for multisensory stimulation, and it vibrates all on its own!”
Bond was about to reply when he felt Vesper Lynd lean against his shoulder. The warmth of her bare flesh percolated through the mohair of his jacket. The message in her dramatic, dark eyes was unmistakeable. Bond hoped fervently that the dinner trousers hadn’t permanently cramped his style.
Vesper’s elegantly manicured hand closed around the Vocktail and a small smile played around her perfect lips.  Then she looked back at the maître d’.
“Can I get a bottle of chilled Bollinger Grand Année…and the beluga caviar?”
The maître d’ inclined his head obediently.
“With everything?”
“Yes, with everything.”
“I’ll have it sent up immediately. And would that be for two, Madame?”
Bond noted the lasciviousness in Vesper’s eyes. Then he realised she wasn’t looking at him. She was looking at the Vocktail which had begun vibrating in her hand.
“No, for one.
And you’d better send up some more batteries too.”

Read next -Lo Expectations: The Year of the Metal Ox →

Join K D's mailing list to receive the latest news, updates, articles, videos and future thinking from Quadrant 4 and beyond.

Thank you for registering for updates from K D Adamson. You can change your preferences or unsubscribe at any time

K D Adamson uses Campaign Monitor to store your email addresses and send you email updates. You can access this account and update your preferences or unsubscribe at any time.