the logo – a modern akhet

The logo | A Modern Akhet

Logos should encapsulate and communicate essence, meaning and promise as instantaneously and universally as possible. K D Adamson’s brandmark is a modern representation of the Akhet – the ancient Egyptian hieroglyph for the horizon and the future – designed to convey her three core beliefs and one overarching ambition.

foresight – the engine of humanity

Contemplating the future – the human superpower

K D Adamson reminds people that what makes humans unique is our ability to contemplate, anticipate and plan for the future.

Other animals have demonstrated themselves capable of limited foresight, but none come close to us. Over recent decades we have discovered that far from living in the past we really live in the future. Studies have suggested that humans think about the future three times more often than they do the past.

We are realising that people who suffer from anxiety and depression struggle to imagine positive outcomes, overpredict failures and overestimate risks because they are suffering from a grim view of the future more often than a troubled past.

“Our ability to mentally create both an unlimited set of diverse landscapes beyond the horizon, and a shared understanding of them good enough to allow us to evaluate them as options is the engine of humanity. That’s why reclaiming and reframing our horizons is so critical.” K D Adamson

A symbol of the future reimagined from the past

Logos are a modern obsession, but they speak to the most ancient of human communication. Egyptian hieroglyphs may be thousands of years old, but our modern world of emojis, ticks and golden arches demonstrates the enduring power of symbols, and today logos are designed to convey essence, meaning and promise as instantaneously and universally as possible.

The ancient Egyptians and Mesopotamians understood the power of symbols, but they were also obsessed with the future. Those distant forebears believed absolutely in their power both to see into the future and to influence its actual outcome; to understand their destiny, but also to shape it.

The Akhet is an Egyptian hieroglyph that represents the sun rising over a mountain. It translates as, and is the ideogram for, horizon and so also denotes the future. Egyptian scholars have identified that the word originates from the phrase “an effective spirit” and suggest that the eastern horizon in ancient Egypt was known as the Akhet, meaning ‘Place of Becoming Effective’.

“Viewed from the Sphinx at the time of the summer solstice when the sun is at its greatest distance north of the celestial equator, it sets directly between the pyramids of Khufu and Khafre, thus writing across the horizon an akhet ‘on the scale of acres’. This is a clear reference to Horus [Heru] the god and the akhet sign, because anyone approaching from ancient Memphis would have seen the head of the Sphinx silhouetted between the two pyramids.” 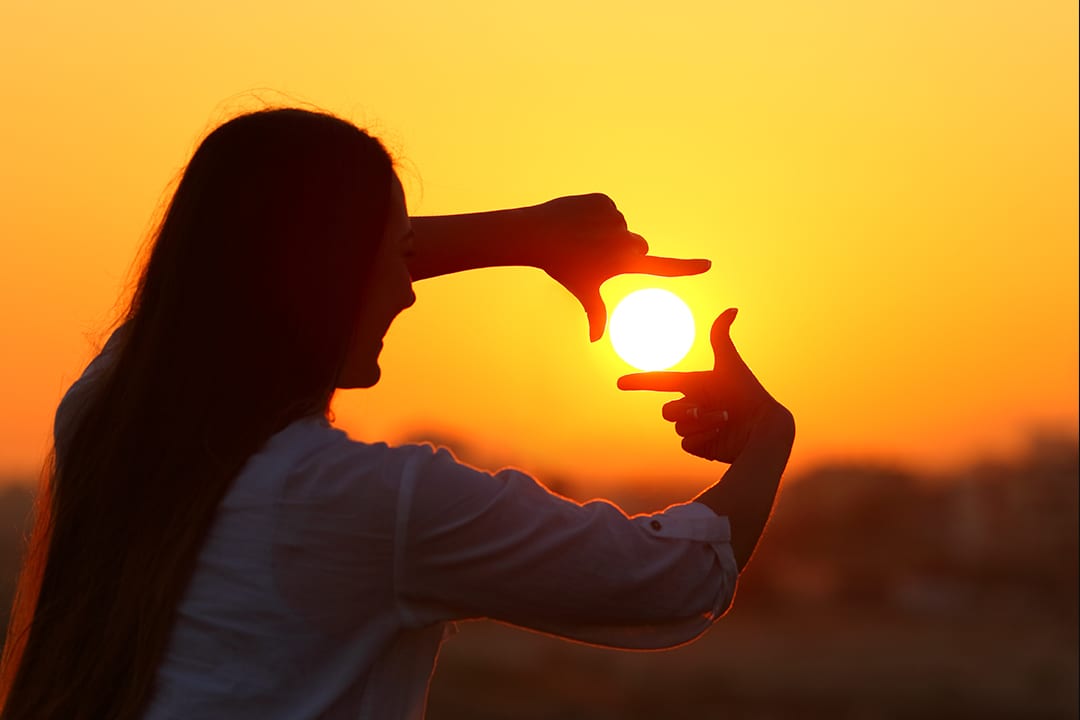 K D Adamson’s brandmark is a modern representation of the Akhet, formed of the letters ‘K’ and ‘D’ using her Vonique 64 font.

We all frame our own horizon

At present most image recognition AIs classify K D Adamson’s logo as a clock. Which may be coincidental, but probably isn’t.